What was your favorite toy when you were younger? When did you get it, do you still have it, etc?

It was always trucks. I was an early adapter, and compensator. I just loved everything that was a truck. Yet, I had no real knowledge of them. My folks never had a truck (not too useful in Phx) and their friends, neither. I didn’t even buy my first truck, it wasn’t my choice. BUT… when I met that truck, I knew immediately it was the beginning of a long relationship.

Do you still sleep with stuffed animals? If you do, what kind?

My cat. Does that count? Oh, I still have my childhood teddy bear. Isn’t that cool? He has had to have a couple surgeries over the years, I called them ‘stuffectomies’ when he got too thin. It’s a medical term, you wouldn’t understand. He is now kept safe in a closet away from the dogs.

Have you ever collected beanie babies, barbies, matchbox cars, etc?

We have a few select collectible Beanie Babies. There is a Shannon Sharpe one, and a Jerry Garcia one as well. This was back when we all were told we would be able to retire on our resale fortunes of beanie baby stocks. So, still have those around somewhere… but they are not out. Not because I think you will steal them, mind you, but to keep them away from the pets. You may steal them if it means that much to you, I guess.

Have you ever collected toys from the kids menus of fast food restaurants?

I used to collect Happy Meal stuff when I was a kid. My favorite was a UFO one. This is probably about 35 years ago. The happy meal came in a plastic UFO shaped disc that snapped together. Even better? It came with glow in the dark stickers to apply. Yes, life was good indeed on that afternoon.

Well, lemme tell you a little bit about that. When I was young, my mom called me a ‘pack rat’. Today, of course, the term is ‘hoarding’. I did like to hold on to stuff that I might find useful one day. You know how they rationalize keeping a broken and shattered $2 lamp with no lampshade… thinking they may fix it up in the future? And then will be hailed as a genius for seeing art where others saw only trash? Yeah, that was my vision.

Here was the deal. My mom had Sundays and Mondays off when I was young. Sundays she spent with us doing Sunday things. On Monday, however, she would clean the house stem to stern while we were away at school. This meant her going through all my personal shit (and rightfully so, in retrospect, though I felt violated at the time) and throwing junk out every Monday.

SO… knowing this was the operation pretty quickly, I developed a system. When I got home from school every Monday, I would first go look in the garbage… before even acknowledging I was home. I would sneak around to the side of the house and reclaim whatever junk of mine she had thrown away that day. I would then set it aside in the alley for retrieval at a later, more discreet time.

One thing she threw out that I still remember and makes me sad was my collection of concert ticket stubs. I have seen SO many concerts it would sicken you. Many of these were even by myself. Old acts, such as: Don McClean, Arlo Guthrie, Richie Havens, Bob Dylan.   Then, I was also deeply into metal. So: Dio, Iron Maiden, Motley Crue, Anthrax, Metal Church, Megadeth, Wasp…. Etc.   I kept ALL these ticket stubs and somehow they got tossed. I have a new collection. It is almost everything since we moved to Colorado in 1997. It is thick, take a look. I have NO idea how much shit is in there. I add to it, but never stop to count it. Maybe a few hundred events? Maybe more? 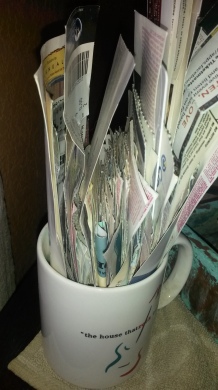 I bet there are at least 20 variations of Grateful Dead projects seen at Red Rocks:  the Dead, the Other Ones, Furthur, Phil and Friends, Ratdog, Bobby solo, Bob and Rob,  etc etc etc etc.  I moved to Colorado a couple years after Jerry died.  So, all my proper ‘Grateful Dead’ shows were behind me.  However, I have seen every iteration since then come through town.

1 thought on “Friday Fives – toys in the attic”