First, start here.   Did you read that?  Only if you did, you may go forward.

When we landed in Bangkok, it smelled. It smelled bad. I didn’t want to judge, though. Also, I was too tired to judge. I had been flying for about 40 hours straight, so I just wanted to sleep.

The next morning, we went out and about. It was true, Bangkok smelled. BAD. I thought, maybe it’s garbage. Such a big city could have acres of unprocessed trash. What do I know? Am I being racist?

Then, I thought… maybe it’s poo. I read about the bathrooms here in studying for our trip. Well, I read that there are not bathrooms in the traditional sense. Instead, its mostly a hole in the ground, and no TP. So, that must be it, right?

Bangkok smells like feet. Not just feet, but the feet of a man who eats nothing but raw red meat and sweats the sweat of a sinner who never baths. That kinda smell.

Then I thought, does anyone else notice this? The wife did, but I couldn’t ask anyone local. Two reasons for this: 1) they probably no longer notice it and 2) it’s somewhat impolite to fly across the earth and meet a new culture and say “why does your entire city of ten million people smell like rapidly decomposing feet?”. It is just not how you go about meeting people.

So, I figured suck it up, it isn’t my business and maybe I am being racist and America probably smells plenty funny too.

Wait, maybe it’s the water! Of all the places we went (Thailand, Cambodia, South Korea) you could not drink the tap water anywhere. Obviously, water is life so that is probably the problem.

It wasn’t. On our first full day we went on a tour to the local flower market. The smell got worse, and closer, and worse. It wasn’t garbage, or sewage, or even by feet. It was Durian, which is a fruit. Apparently, it is quite a sweet fruit, and loved by kids. The outside of it, though, is just horrible. It is SO strong that, seriously, the entire country smells like this fucking god-awful fruit.

Proof? When we got to Chang Mai (a wonderful little city in Northern Thailand. We spend almost a week there, its where the lantern photos are from) we found this sign in the hotel.  Took this pic myself.  There is, quite wisely, a ban on this shit throughout the whole town. Wisely no. 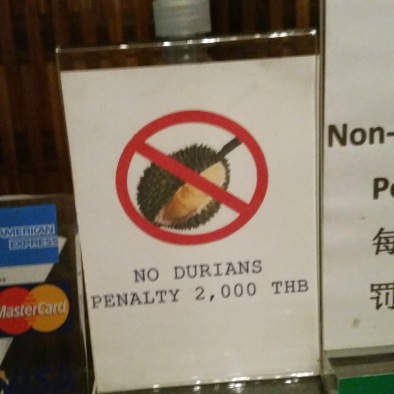 Up top is a picture of the fruit. Want smell-o-vision? Here is what you do. Wear the same socks for a week, day and night, no showering or changing. THEN, at the end of that week, take a dump in one of those socks. Don’t worry, it’s not as tough as it sounds. Now, leave that dumpy smelly sweaty sock in a hot car for one week. THEN… take it out, and smear it across your computer screen. Then, read this piece.