When you think Utah, you think Mormon, right? Weird folks, with supernatural views about volcano gods and aliens hiding in pretend airplanes sneaking negative thoughts into your psyche. Wait… maybe that is Scientology. The ones who didn’t believe in blacks or native Americans, right? nO… wait… that last part was definitely Mormons. Aw, who cares? Are any of the origin stories about religion any sillier than the others? YES, there. And Mormons is near the top of silly nonsense. I have literally studied much about comparative religion. Mormons should thank their Christ, whoever the hell that is, that Scientology came along and looked even dumber.

To be clear, I have no beef with Mormons.  I am not counting Warren Jeffs, or any of those sex trade monsters in my accounting of ‘mormons’.  That would be clearly unfair and mean.  That would be like hating Christians because of Rev Fred Phelps.  That man was many things, but I don’t count being a Christian as any of them. I know plenty, and always have.  They are universally nice people.  I just think their belief system super bizarre.  However, if that is the worst they do, good on them.  The thing is, you can’t swing a 12 year old bride in Utah without being hammered with the LDS (Latter Day Saints) dogma.

Wait… wasn’t this supposed to celebrate how great Utah is? Yes… and we will. To do so with justice, though, we have to acknowledge the elephant hiding in the room. You know, the one buried in the desert with the golden key that explained everything the elephant said about the real history of mankind? And how the elephant told NO ONE ELSE but you, and it was impossible to verify your story to anyone. Yeah… that elephant in the room. See what I did there? If god opted to update the entirety of human history, wouldn’t he have told more than one single guy? Wouldn’t he have given him some kind of proof, so when that one guy went to the world he wouldn’t look or sound like a raving lunatic? If that is your god, he set you up to fail, and that is a dick move. Just like what god did to Abraham about the killing of his son, just to test his loyalty. TOTAL dick move. With all this said, I still love Utah, and you should, too. It may be the most beautiful state on Earth.

*** according to this study, it’s 60%.  Lower than I thought.  Depending on who you ask, America defines itself at around 80% Christian.  Not much less silly a dogma to follow.

Utah is beautiful. Really, really beautiful.  The state is just stunning! It seems almost entirely composed of various state and national parks, just like Alaska. I have been all around the country, and I think Utah may be the most beautiful. Go see their state parks! They have a zillion:

There are multiple bonuses. The first is, you get to see stuff like this in your rear-view mirror. 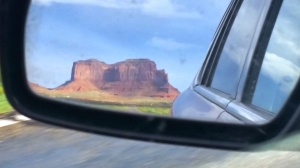 Note – photos above by me, from my phone, last weekend. Photos below, not mine.  That photo closest I took in my side view mirror as we headed away.  I was driving about 80, with my knee, as I was fidgeting with my phone to get this shot.  The wifey was super not amused. I told her the shot would pay off, and it did! The other upside is the parks are the only places where you aren’t force fed weird cult history of the prophets profits. Seriously, everywhere you go in Utah is a famous Mormon landmark, and you are going to learn about it. Even their cities are STUNNING. Look at Salt Lake City. They have a mountain right in the middle of the damn town, and it is so cool.

and this is Provo. Was there for a wedding years ago. Had some strange experiences there involving me trying to order a Whiskey Coke in a restaurant. Well, Provo is one of the big hubs of LDS, so that went bad in about 6 different ways. I almost got kicked out for asking, but luckily they didn’t know what that was.

I have to wonder if they know it’s a great secret, and just don’t want anyone to know. I don’t see commercials, or ads, for this stuff.

1 thought on “Utah needs a new PR guy… like me”