What’s the deal with opera?  Do you understand it?

No.  But, I have been to one.  It was pretty cool. We were in Prague, i think.  Maybe Vienna? Trust me, this isn’t a humble brag.  It’s me saying ‘all those cities run together in my mind and memory’ and there was a Mozart play playing.  And… it was playing in the theater it was written for. Mozart wrote this specific play for this specific city for this specific opera house.  It’s apparently a super famous one, called ‘Don Giovani’. You know the phrase for a real ladies’ man ‘he is a real Don Juan’? It’s from this play.  It was more enjoyable than i expected. Probably because it was filled with more sex and murder than can be found outside of a Tarantino movie. I guess times haven’t changed that much.

And here was a bonus, we were able to understand the story.  This was big, because it was in Italian. This much i knew about, ALL operas are in Italian.  Always. No matter where they are. This theater, though, and a caption thingy. Hanging from the hall was a huge LED thing that translated what they were singing into two languages;  Czech, and English. I wanted to capture the moment, and the play, and the jumbotron translator. I needed to, because it was all too cool and unique to explain. Problem is, you can’t take pictures… for a million good reasons.  Guess what, you tourist nube, put down your phone for five minutes and try and actually experience life. Maybe that is why you don’t take pictures. You can not live your life behind a cell phone screen, if you are going to do that… why leave the house?

But… of course… I took pictures.  I am not going to be here again, and I can’t possibly describe this like a picture would  I got a couple off before the wife (quite correctly) smacked me.  This is a very cool picture, though. It captures the size of the theater, our seats, the incredible sparseness of the sets.  Well, there were no sets… as you can see. Just a stage. Is that a regular opera thing? I don’t know.

Note in the cell phone photo above (don’t worry, I didn’t use a flash) you can see towards the center and top of the photo… they are translating the song lyrics.  The top lines in green are the Czech translation, and the bottom two lines are in English. I kinda have to wonder… before this awesome and helpful technology… how did people know what was going on?  Note, this play was written by Mozart to be played in Prague, and to be sung in Italian. Perhaps you think ‘well, you can tell by all the non verbal queues what is happening. I could play Princess Bride in a different language and still follow the story.   Not with this play. Nobody moved, they stood there and sang. You can see there were no sets Which character was which? Can’t tell, as you can see I am about 100 yards away. There was no ‘jumbotron’ showing closeups… like all rock concerts have. I say all that to say thank god for that translation board, or it would have been hell.  Since I got to understand it, we really enjoyed it.

the barely lit folks you see at the foot of the stage are not audience members with great seats.  It is the orchestra pit.  These are the unsung heroes.  They are doing just as much work as everyone on stage.  Actually, most are doing some way more complex than what is happening on stage.  They do it every night, and in real time.  They are involved in every scene… but they don’t get the bows.  They don’t get their pictures on the playbill.  They don’t have roses thrown at them.  They don’t get flashed by random babes.  Just kidding, they do.  It happened to me once, and it was fantastic!  On the whole, though, I feel the musicians are under appreciated.

Back to the question- do I get or understand opera?  Not really.  I can’t fathom sitting around and listening to the cast recording.  BUT… it was a good experience.  It wasn’t long and boring.  You get all hopped up on wine, and the story moves pretty quickly.  It runs just over an hour.  Then there is a nice long break to pee and load up on more wine.  A helpful chime reminds you when its starting back up (just like plays do).  Then, you have another 80 or 90 minutes to wrap it up.  Only downside would be what I call the ‘opera drum solo®‘.  That is where you can see the song is ONLY there for the lady show off her singing chops.  A lady in too many clothes does like 6 minutes of just pitch variation… to show how good a singer she is. It seems every art form has it.  Movies have the oscar bait soliloquy. *** If you get the chance, go!  It is not an experience I would seek out, but if it landed on my lap I would absolutely do it again.   Btw, experiences like this don’t just fall out of the sky.  The wonderful wifey did months of research to find these pearls.

ok, what were we talking about again?

What’s the deal with Shakespeare?  Do you understand it?

I haven’t tried it in a long time.  I took a Shakespeare class in college.  Mostly, I very very much enjoy the stories.  He really did write great stories that totally stand the test of time.  What doesn’t stand the test of time, though, is the language. It makes it tough fo follow, and is a distraction.  I get that the appeal of Shakespeare IS the writing: the meter, the flow, the puns, the iambic pentameter. I am a literature guy, I understand these things… but I don’t like them.  I want the story, and that can be tough to extract from Shakespeare.

What’s the deal with Classical Symphony music?  Do you understand it?

What’s the deal with Poetry?  Do you understand it?

Yes.  Do I enjoy it?  Very rarely. More often than not, I don’t find soulful expression.  I find it lyrical masturbation and self indulgence. Like my complaint with Shakespeare, I think the message would be better served if simplified and modernized.  It’s probably because I was only exposed to total shit in school. That is what public school feeds you for ‘art’… total fucking shit. I HATED HATED HATED reading when I was a kid.  Wuthering Heights? The Scarlet Letter? I’d rather get paper cuts on my tongue. Actually, I probably got both… falling asleep trying to read those Newbery winners. Remember… books and reading and writing are my passion, and my degree. Not because of public school, but despite it.  Had Kermit not turned me on to Hunter Thompson at 16, I might likely have never read a book again.

Don’t feed a 14 year old kid Nathaniel Hawthorne… give him/her some Jack Kerouac.  We need to party with Neal Cassady! 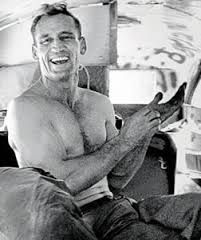 Don’t feed a teenager Emily Dickinson, give them some Baudelaire***. Show a kid that art can be great, and funny, and dirty.  Give a teenager some Allen Ginsberg!.  You think rap is racy today?  When Ginsberg published Howl, they tried to put him in jail.  He had to go to trial on that action.  Baudelaire’s breakthrough book is ‘les flures de mal‘.  Translated verbatim – the Flowers of Evil.   Fuck yeah, baby.  the Flowers of Evil?   Find me a public school administrator with the balls to put that in the curriculum

That is how you engage a young mind, you public school conformist creating monsters!  In reading over this, it looks like I am railing against literature and art and poetry.  Or, maybe that I am saying I am above all that, or cooler than literature.  No sir.  I am lamenting the fact that every generation we lose artists and interest in the arts because we are only offered the lowest common denominator.  What does a 16 year old kid think about?  Violence, boobies, action, murder.  Guess what, that hasn’t changed in 2,000 years… and there are TONS of great books and poems and operas about it.   This is what makes Hamilton so cool.  Bring these stories to a new generation, and reaching out to new audiences, and using modern language.  Kinda ironic that its prolly only old white people getting to see it.

What’s deal with Wine Tasting parties?  Do you understand it?

Dunno, never been invited to one.  I do enjoy wine, though. I will tell you this much – starting about right now, i only drink red wine during Fall/Winter.  I also like my red wine much cooler than room temperature. I am not above putting a few ice cubes in a glass of red wine. I think a glass of wine at 72 degrees is disgusting.   Now you see why I don’t get invited to wine parties. When the weather warms up, I prefer a white. Not too sweet, not too dry. I think I am thinking of a Riesling, but I am not totally sure.  I have never spent more than $14 on a bottle of wine.  Why? LIke Tequila, I fear you could give me a $10,000 glass and a $10 glass and I might not know the difference.

Don’t worry, if we drink wine together (and we should) I will never say things like ‘oaky’, I won’t discuss its ‘legs’.  I won’t debate you about it’s ‘vintage’. Once I have settled on a wine not too sweet or too dry…. I will say things like “this is great.  We need more. A LOT more.”

So… can I come to your wine party… please?

OOOHHH WAIT.  I can say something useful and thoughtful about wine. I learned this from some cooking show long ago (prolly Alton Brown).  They called it the ‘20 minute rule’. If you are drinking red wine, put it in the fridge 20 minutes before you are ready to drink it.  If you are drinking white wine, keep it in the fridge until 20 minutes before you drink it. That is handy, and easy to remember. See how I make you smarter?

*** ok, i used the Glengarry Glen Ross scene as an example of actor hubris.  It’s true.  It is goddamn brilliant.  This has got to me mt favorite 3 minutes of film of all time.  Let’s stop and watch it together, again.