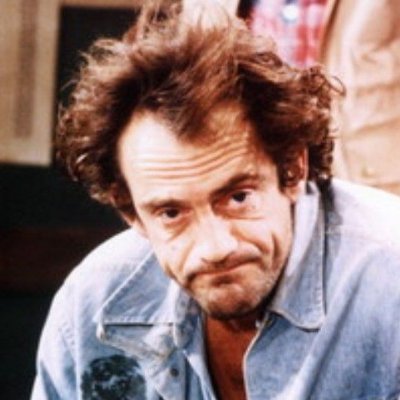 Who was the best drunk/alcoholic character in a TV show/Movie?

With a nod to the late great Foster Brooks, whose job this was full time… the Oscar goes to Christopher Lloyd.  Aka Doc Brown from Back to the Future. Aka Judge Doom from Roger Rabbit.;  Aka Uncle Fester.  And aka the greatest drunk character the motherfucking greatest character alive – The Rev Jim Ignatowski.   Now, I know I just wrote about him a week or two ago.  Not sure if I did any clips.  Let me turn you to some classic Rev Jim from the show Taxi.

Note Tony Danza’s character.  I don’t even think he has lines, but you VERY much see the Joey Tribbiani archetype being developed.  Maybe Danza didn’t invent the ‘hot dumb italian’ trope he musta done something right,  Not only was Joey Friends characted lifted wholesale of Danza’s back, but they even wrote a #1 hit single about this guy.

You’ll ask him for something bougey, high brow.  You want him to know, without being a dick about it, that you are no rube.  Let’s start with rocks glass full of JD, neat.  No ice, that’s for pussies. Though a little effeminate, let’s segue into an Espresso Martini, w/ ‘top shelf’ vodka.  How about some Tito’s?  You tip well, and throw in a dig about ‘hipsters ruining everything’.  You speak blue collar, because you are blue collar.  Working class, but refined.  You are educated, but not elitist.

He hands you a Coors Light.  He tells you to ‘lighten up already, Francis’.   And he would be correct.

What is your favorite holiday season cocktail?

the Jason Bateman.  Hibiscus tea, vodka, and some kind of simple syrup.  I can’t say it’s a tradition, only had it once.  Once wifey made Hibiscus tea, and a LOT of it.  It was a snowy day, so there was nowhere to go.  And when you have a lot of vodka, a lot of Hibiscus tea, and nothing do do for the next 12 hours or so… you make yourself a Jason Bateman®.  Also, there is the Roger Bottoms®.  Either Roy (my pal and editor) invented it, or he and I invented it together.  It is Guinness and port wine.  Yes, sounds silly, but its serious fun.  Know what else sounds funny?  The name Roger Bottoms.  Roger Bottoms was the name of the listening agent who was helping to sell our house.  As we sat and drank on the porch, we looked at the real estate sign in my yard and tittered.  A side note to that, this Roger Bottoms fellow… never met it.  Listing agents get 6% of a home sale, right?  That butthole made around five grand selling our house.  He had never stepped foot in our place.  We dealt with a wonderful realty gal, but she was no Roger Bottoms.  She does all the work, and Roger Bottoms collects the money.  Looks like ole Roger Bottoms has the last laugh here.   Well played, Roger Bottoms.   Well played.

Do you have a fancy show-off cocktail?

Are you not paying attention?  We covered that.

Can I tell you a great golfing joke, since we already talked in excruciating detail about my drink inventions?  Also, I don’t like golf.  But I heard this comment, and it really tickled me.  Of course you have heard of the drink ‘Arnold Palmer’.  I think its half lemonade and half iced tea.  It is named after a legendary golfer.  This gent was prolly biggest name in the history of golf until Tiger.  But, Tiger doesn’t have a drink named after him.  So you know that part of the set up.  Now you need this part.  There is another iconic and important golfer named John Daly.  While being a great golfer, he is much more famous for drugs and booze and getting arrested and fights and all that.  Let’s just take in his visage.  Its the whole package:  mullet, bleached hair, Oakleys, and a beard best described as ‘meth Santa Clause’.  If Happy Gillmore was from the South, and a lousy drunk… he would be John Daly.  A ‘John Daly’ drink is an Arnold Palmer with vodka added.  That’s funny, and mean.

An aside, about the shades.  Those specific glasses, I believe they are called ‘Blades’, and are by Oakley.  These glasses were VERY iconic and popular with douchebags.  There is a VERY specific type of guy who wears this  He has a white Chevy truck.  He is wearing a tank top that says ‘Club Bad Boy’.  His truck probably has truck nuts, and he is pretty sure that… and everyone of you little queer friends are ‘a bunch of fags’.  It seemed in the 90s, this represented approx. 42% of all white men.  Those

sunglasses, they are so ugly.  And so specific.  And I swear it was the most specific group of ‘deplorables’ who were drawn to them.  It’s as if to say ‘what is an fashion accessory I can wear that also says ‘I hit women’?

In case you weren’t totally positive of his allegiance, he also has a vinyl decal of the logo above on the back window of truck.  Just up and to the right form the sticker of Calvin pissing on a Ford logo.  Classic, bro!  Tell me this is not the picture of a guy who rapes cousins and sets puppies on fire. 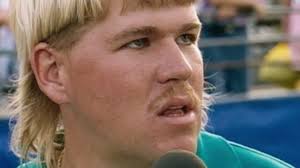 The vitriol I had for these folks was aggressive.  I think we can see that it still is.  To me, these muscleheads represented everything wrong with men, America… the works.  Obviously, there are deeper issues.  This fad has mercifully been gone for decades. Let’s try and reflect.  First off, I think the projection of hyper masculinity bothers me.  I think there is so much violence and brutal sexualization of women… I dunno.. it just seems an unnecessary statement.  But women can stick up for themselves, right?  Do they need me to the culture police?  Lets’ REALLY look at this.  I am by no means a ‘manly man’.  I am not out there tossing capers, having beard fights, and switching out engine parts on the side of the road outside of Barstow in bat country.  And the self confidence, that may all be it.  I am jealous of the self confidence.

Ok, I got way lost there.  Why was a trashing John Daly?  I don’t know anything about him.   It was all to set up the punnery in the drink name.  But once I started googling pictures of this guy… well the content writes it self.  THEN… I saw him in those Oakleys and I was literally triggered.   I could take you over there to my college journals (which I haven’t touched in 30 years) and I bet there are many pages of content just railing on the package deal of a guy wearing Oakleys, and a ‘Club Bad Boy’ short.  When life gives you lemons, make lemonade.  When god gives you Kid Rock the golfer, you bust out the blog. 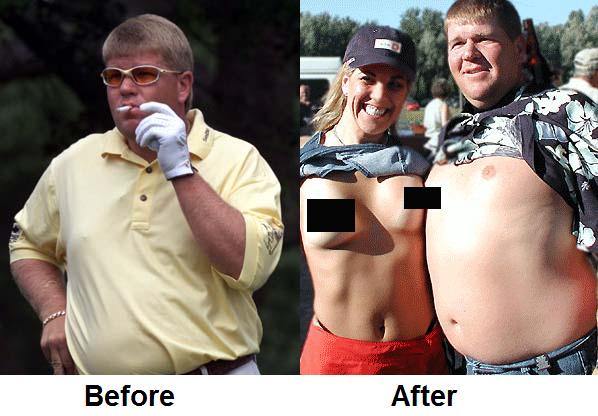 What is the best drunk/alcoholic/booze-themed song?

Gotta go with Margaritaville.  Yes, it’s oversaturated, but its not overrated.  The lyrics are so incredibly well written.  The way he turns the phrases and play with words and images.  As a word lover and amateur writer, he dazzles me.  The song is so successful, Buffet has built an industry empire over that song.  I really like Jimmy Buffet, but more as a person than musician.  I only know a few songs, and I don’t own a single record/tape/cd whatever.  But I love him.  He lives the dream he is selling to us.  He does tons for charity, and has a great sese of humor.  He was also great friends with Hunter S Thompson, and helped to raise his son.  Yeah, Hunter was such a hot mess that they guy who got famous singing about blackout drunk adventures was the safe choice.