When we had started, I asked you to start here. I talked about sweeping generalization, and uninformed opinions. That is pretty much what this story is about. I like to call this “Chinese people eat the weirdest shit’. That is a strong statement, especially from someone who has never been to China. I am, however, very observant. In our travels across Southeast Asia, we went to a ton of markets. To generalize, again, people in Southeast Asia don’t go to supermarkets. They go to markets, which are outdoor, stall based systems. They are generally covered, and take up roughly a parking lot.

None of these things are judgements.  They are observations.

The meat we got in Cambodia had hair on it, still attached. I don’t even know what animal it was. Not sure I wanted to know. We didn’t want to seem discourteous. So, we smiled graciously as we forced down the hairy knuckles of lord knows what.

Look at this.  This was in the Chinese gift shop in Cambodia.  These are octopus flavored thingies.  NOTE:  It is not actual octopus.  It’s corn puffs, I think (think cheetos, here).  It is just octopus flavored.  Also, this bag is HUGE. It was over three feet tall, and came up over my knees.  Why the hell would you buy something that bit and unwieldy in an airport?   Well, I guess this octopus is duty free!  Here is the two things you hear about ALL Chinese food.

For the purpose of journalistic integrity (which, at the end of the day… is really why you come here) this was also not found in China.  It was in the airport in Cambodia.  In the Chinese gift shop.  Is that enough to peg a quarter of the earth’s population as bunch  giraffe anus eaters?  It’s good enough for me!

Thailand, by comparison, is rich and stable. In Thailand, the local people eat exactly what you eat, and exactly what you think they eat. They are eating Pad Thai, and all that. We aren’t here to talk about that, though. When you look over a Thai person’s shoulders at what they are eating, it looks delicious.  Every time.  We are here to talk about Chinese food, but I thought that ramp up was pertinent. Whenever we got to really strange looking for, it was invariably the Chinese food section. See, Chinese People are not eating sweet and sour chicken. People in Mexico aren’t eating chimichangas.  People in China are, apparently, eating dried giraffe rectums.

Chinese people are CRAZY about luck. Yes, that is a sweeping generalization, but I dare you to defy me. The funny thing, to me at least, was the weirder food got, the more I would hear those two key phrases. Apparently, they (Chinese) love octopus. I say ‘apparently’ because we didn’t see much octopus, but everything was octopus flavored.

I am going to spare you the pictures from the Chinese market. Well, here is one. This is a bucket of snakes. Live snakes. Not pets. Food. Ok, in closing… one more thing about the Chinese (in Thailand… the Chinese in Thailand. I don’t know dick about China, never been there.) ******

Lastly, look at this.  Take a look at the visual pollution. I thought this was fascinating. I tried to explain it to people, but it was tough to articulate. The pictures tell the story. These two pics were taken less than a mile apart. The top is just a street in Bangkok. The bottom is a street in Bangkok in Chinatown.

Dazzlingly. all of these photos were taken by me on my telephone.  Ain’t technology grand?  Above… not Chinatown.  Below… Chinatown.  These were taken blocks away from each other… both commercial business districts. 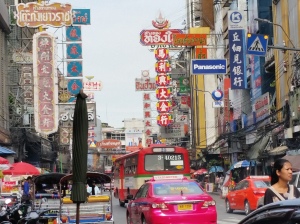 Now, leave me alone. I have to get back to my lucky giraffe rectum lollipops.  Really, they grow on you.

***** Listen > I know eating snakes isn’t that big of a deal.  In fact, pretty much everyone eats snakes.  Most of the photos I took of the disgusting food just look like amorphous blobs.  Plus, the lighting was always bad.  It wasn’t just gross animals.  Oh no, it was always the grosest part of each animal.  Perhaps they are just feeding their kids the nasty shit they don’t want to eat.  Then, just tell the kids its good and lucky.  I mean… does that work?  If it does, BRILLIANT!