I am not concerned for their victims, or whole horrible suffering. I am not concerned that the violent crime are being committed by beautiful women. It’s not even that they are women. Well, it kinda is. Check out these mug shots, and what these ladies are in for.

By the way; yes I know there are plenty more evil men with even more twisted mug shots. However, there is something about a stunningly beautiful gal whose life as a free person is now completely and incontrovertibly over.

This gal below, lets call her ‘Sonya” – she just suffocated her two infant children to death

This stunner just got busted for firing on cops. So, she is not only a cop killer, she just got busted for it. They have her, cuffed. The yellow jumpsuit is a felony arraignment outside. She seems pretty pleased. Wouldn’t you at least PRETEND to be sad at your hearing? I wrote about it here a few years ago when this unfolded

Now this gal, she is the mother of it all. She was my first foray into the crazy hot mugshot world. This stunning cheery gal is a bad breaker-upper. See, if you break up with her, she calls the police and says you are a serious deadly threat and likely to kill everyone around you. Since she is a psych nurse, they take this seriously. As well they should.   She has done this more than once. It’s her thing

I am sure there are many more, but I am too scared to properly research this story. I have no desire to find more pretty gals who can kick my ass… and smile about it.  To you homicidal babes out there, at least PRETEND to be sad for a few hours.  It goes a long way.  We should call this the “Casey Anthony Stare“.  I wouldn’t joke about that, she will kill you.  Oh, and this one will, too.

So, there are 3 crazy siblings who went on a rampage across the country.  Mostly, bank robbing, with some pedophilia and cop shooting thrown in for good measure.  The started their crime spree in Florida, and then did a road trip across America making trouble.  The adventure stopped in Colorado, featuring a high speed chase, epic car crash, and a shoot out with the cops. I know, awesome, right?  It needs to be a movie.  It reads like a movie.  We are here to discuss the casting process.  Here are the actual people who did this –

So, how do we cast this movie?   That is my only concern.  I don’t care if they did it, or what they did.  It isn’t my business.  I just want this made into an awesome movie pronto!  Let’s start with googley eyes, Dylan.  This guy is fucking nuts.  Look at this photo.  No trial needed, guilty!

Dylan Dougherty Stanley, 26, fired at least 20 shots at Zephyrhills, Fla., police officer Kevin Widner, who had tried to stop them for speeding

The thought process must have gone something like this:  Team, we are getting pulled over for speeding.  If he runs your names, which he wouldn’t for a speeding ticket, he may see a bench warrant for you two assholes.  We can pull over and play it cool… maybe just get a warning.   OR…  we murder the cop in cold blood to avoid your 2 month prison sentences.  Shall we take a vote?  Ok, kill the cop it is.  Good talk!

If Heath Ledger were still alive, I would use him.  Next best crazy?  I am going with Giovanni Ribisi.  He is an amazing actor, and adept at playing crazy.  Note, he possesses said googley eyes… so half the work is already done. Plus, he is a Scientologist and all.

Now, for the hot sister.  Seriously, she is too attractive to be a cop killer.  However, she is.  She even confessed to the whole thing.  Luckily, she is a terrible shot… so she never hit the cop.  But, the cop hit her.  Shot her in the leg.  Here is our protagonist, who was a stripper in Florida before becoming a bank robber.

Lee Grace is crazy.  How do I know?  See that beautiful smiling and laughing face.  This picture was taken in court, when she was being arraigned for trying to shoot a cop.  That yellow is the felony jumpsuit.  Here is a tip:  when you are being arraigned for a multi state crime spree that involves cop shootings in two different states… at least pretend to be remorseful. I just don’t get it.

here is a quick bio on her:

On May 7 near Cocoa Beach, Fla., she crashed a Ford Mustang while speeding, police said. She kicked, punched and tried to bite the deputy trying to arrest her for driving under the influence, court documents say.

Scratch that, new plan.  I am casting the stunning and talented Kaitlin Olson (pictured below).  She is the female lead from ‘Always Sunny in Philadelphia’.  In fact, it is entirely possible this entire event is a screenplay from that wonderful, wonderful show.  Lastly, she looks like her… a lot.  I would be remiss in my duties as a male if I didn’t point out there are nude photos of Lee Grace online. But can she do crazy?  Well, apparently you haven’t seen ‘Always Sunny’ the most underrated show in history!

Now, for this kid… the other brother… .  He is the rapey texty creep who started the whole thing.  He was supposed to register as a sex offender, and instead began the whole incident.  The rampage is, in every sense, his fault.  This has not yet been cast, but we are accepting suggestions.  A bio >

Ryan Dougherty’s long criminal record includes 14 felonies stretching back to 2007. He has been convicted of several burglaries, drug possession, destroying evidence and a hit-and-run, plus probation violations.

On Aug. 1, Florida added him to its registry of sex offenders after he was convicted of sending explicit text messages to a child. He was sentenced to wear an electronic monitor with a tracking device on his ankle for two years. Police say he cut the ankle bracelet off at 6:59 a.m. Aug. 2, 13 minutes before the car chase and shooting in Florida.

I will tell you this, though.  Casey Affleck gets to direct it, and I am going to get Tarantino in as executive producer. What about financing?  I have our sponsor lined up, already.  Subaru.  See, somewhere across the country, they stole a Subaru wagon.  This car was bad ass!  It ran over several spike strips, then hit the safety rail on the highway, and then launched into the air and flipped.  here is the kicker.  The occupants all walked away. How bad ass is that car?  You take 3 murderous dipshits, crash, total, and flip their car and everyone is fine?   They didn’t just live… they hopped out and started shooting and running.

* I haven’t quite totally finished the financing piece with Subaru yet.  Apparently, the squares over at Subaru Legal do not find this endorsement nearly as bitchin’ as I do.  Oh well, their loss! * update 10.11.12 > looks like crime doesn’t pay.  Take a look at Lee Grace’s last photo.  The life has truly been squeezed out of her.  I mean, this may be the greatest crime at all. what prison does to a beautiful cop killer.  Look at the photo at the top, and then down at this one.  This is only a month or two later. 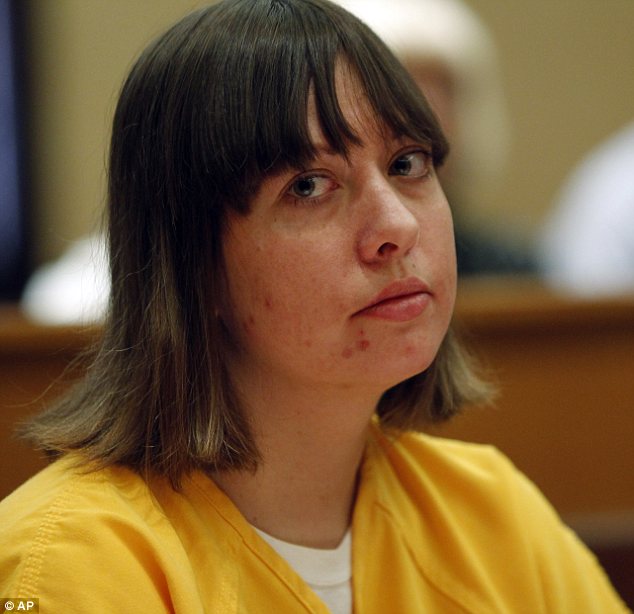 THIS is the look she should have had in that first picture.  Wanna know what prison does to you?  Look at that stunning charismatic woman up top… and this was likely days or weeks later.

Lastly, I think we can all agree we find a role for Gary Busey somewhere in this movie.  I got it!  We’ll need to cast a lot of cops.

** 8.9.13 – America, I am watching this story for you.  it’s just too weird to not follow.  I am not celebrating them.  One of them got caught planning to escape.  How?  They found his letter explaining his plan.  Dumbass.