know this guy?  he is the most important person alive… and I dare say for the last and next 100 years.  Read on to find out why… but its at the bottom

Do you remember the first time you used a computer?

Yeah.  It was before you were born, and about 25 years before the internet.  In 8th grade, I took a computer programming class…. On the Radio Shack TRS 80.  It didn’t do shit.  It was a black screen with one font and one font color.  We learned to write 4 to 5 lines of ‘code’.  It actually looked like this

I found this, a vaunted green screen (even worse). 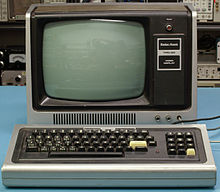 To say your phone has more than this would be a deadly understatement.  Your dog’s microchip has more computing power than this.

We could make our name scroll across the screen in ugly green font.  That was ALL these computers could do.  This was 8th grade… so about 1984-ish

Do you remember the first time you used the internet?

Yes, it was a friends computer, and (of course) it was AOL.  Here is what is and was criminally sucky about AOL.   AOL internet only took you to AOL sites.  What this means is we wanted to look at nekkid ladies.  We knew they were out there, but you couldn’t get there past AOL’s firewalls.  This is pre-google.  This is pre-yahoo.  This is pre-netscape.  ALL the search engines you know didn’t exist.  There was only AOL, they had the entire market… and it would only take you to AOL pages.

Do you remember the first time you used a word processor?

Yes, I had one in college, and it SUCKED.  It looked like, and basically was, an electric typewriter.  You could write a 20 page paper, but all you could see was about a quarter of one line at a time.  You could see about 6 words.  Personal computers weren’t the kind of thing most folks had.  You had to go to the computer lab for that.  And there wasn’t Word, or Word Perfect back then.  Basically, it was like note pad… no spellcheck, no formatting.

Do you remember the first time you used a spreadsheet?

No.  math was never my thing, so I was afraid, and had little cause to use one.  Now, though, I LOVE them.  They do the math for you, and that is a new thing.  Just as long as 3 or 4 years ago, you had to manually create formulas.

what is the next big thing in computers/telecom/technology?

This isn’t about computers, or telecom, but it will effect EVERYTHING.  The most important thing in the world happening now… and for the next ten years… will be inductive charging.  I can not possibly say enough about how important this is.  It is charging things without plugging them in.  Right now, MIT can move electricity about a foot over the air.  This is HUGE.  Using Moore’s law, think of where this will be in 5 years.  You won’t plug your phone in anymore… it will be charging as you walk  in the house.  Same with your laptop.  You won’t need to plug in your electric car.  Tesla is already working on a mat for your garage.   You plug in a big rubber mat into your garage.  Then, you pull your car into the garage same as you do now.  BUT… you are driving it over this mat.  Over night, that mat is charging your car.  Your TV won’t need to be plugged in.  Just hang it on the wall.  No more cables and cords for ANYTHING.

This stuff exists now, but at a very low level.  See this thing?  It is awesome, and I have one at home now.  You plug it in, and then just set your phone on it.  This is MIT type stuff, and odds are it will be Elon Musk who will bring it to market.  Surely you know that name, he should be on Mt Rushmore.  He IS the NASA space program, and I am serious.  There isn’t a NASA anymore, they pay Elon Musks’ ‘Space X’ program to deliver crap to space.  Electric cars?  He is past pioneering them, he is pioneering others.  He took ALL his Tesla patents and published them… for free… for anyone to see.  NO ONE has never done that.  He said ‘look at these, tell me what I am missing?  What can I do better?’  and Teslas aren’t just for the rich anymore, he now makes a 30K model.  Traffic?  He is working on eliminating that, with ‘the Boring Company’.  Alternative fuel?  Yup, he is Solar City.  How about using batteries instead of oil, to capture all that solar energy?  He has the biggest battery factory in the world, it is called the Giga-factory.

Maybe you say, cynically, that its nice to have electric cars… but what would really save the pollution and earth would be long haul trucking in electric vehicles.  Maybe he should do that?  Maybe autonomous ones.   Yup… that is already done.

The earth is dying.  The govt won’t admit it, nor will they stop climate change, but are WE working on getting to Mars.  How?  On the back of Musks’ ‘BFR’ (it stands for Big Fucking Rocket… seriously)

how does a nerd like that wind down?  Well, making and marketing flamethrowers, and getting high with Joe Rogan.  Let’s take a look at this again.  This is the guy who is single-handedly saving the world.