What food is delicious but a pain to eat

Drurian.  It has fouled an entire country.

What’s the easiest meal you know how to cook?

Mac and cheese, or do you mean from scratch?  From scratch… the easiest… spaghetti in meat sauce (jar of marinara).  BUT… we make a seriously sick gourmet mac and cheese.   involves Gouda, and more butter than a Paula Deen fridge audit.

What is the most difficult meal you have prepared?

Done right?  Paella.  Almost impossible to execute, seriously.  That is why the wifey makes it.  It’s a dish we fell in love in with Barcelona.  Like Sangria, you just don’t go there and no consume TONS of both.  That is what is on the menu.  It is delicious, and cheap.  Go to Barcelona (or maybe anywhere in Spain, what the hell do I know) and eat LOTS of Paella and drink LOTS of Sangria.   Life is good.  Then, go see everything Guadi.  * that building up there.  That is a Guadi building.  it isn’t photoshopped, or filtered.  There are his buildings, and they are almost 100 years old.  It is fucking phenomenal, especially if you appreciate art and drugs.  Look, here is another one.

think that is something?  Oh, just wait.  He also started building the only large scale cathedral STILL in construction a 100 years after he started it (and 80 years after he died).  They are STILL building this.   It will rock your fucking skull off if you see it in person.  And… you can.  it’s open, you can go inside and take tours.  it is called the ‘sagrada familia’.  if you don’t believe me, google it yourself.  What you have with Antonin Gaudi is what would have happened if Salvador Dali was an architect this is not a subtle building.  it is THEE defining thing in ALL of Barcelona.  Not to discreet.  Here is a picture of the Barcelona skyline from 50 miles away.  The church is pretty much all you can see.  See all those cranes?  They are still building it.  It’s hollow inside. 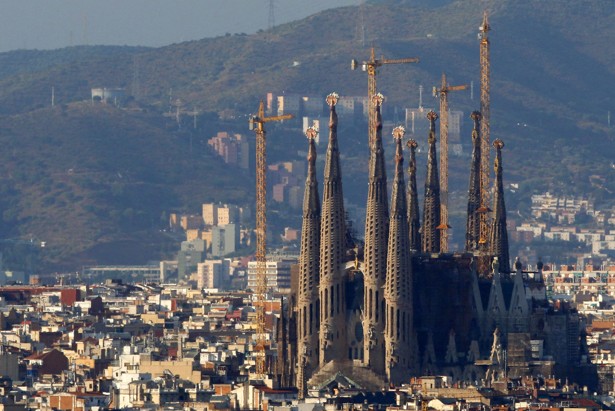 What food or drink can you almost not comprehend other people actually like?

Mountain dew, corn chips like Fritos.  GROSS.  Adam Carolla calls Mt Dew ‘Nectar of the ‘tards’.  I can not disagree with with policy.

What is the “white chocolate is not real chocolate” of other foods?

Well, the vanilla you are using isn’t vanilla.  Vanilla only grows one place on earth, Madagascar.  What we are likely getting, even that precious bottle smuggled from Mexico, is Vanilla flavoring and a lot of alcohol.  Just like kissing your sister.

When you travel to a new city, what kind of points of interest do you research to check out?

Whenever possible, I really really like to have someone local with me.  Someone who can say “don’t do that, that is a scam and not all that interesting.  Here is the real gem of the city only locals know about.”  And things like traffic info ‘the best way to get around here is the subway’, or ‘make sure you rent a car and go do _______’  you can’t get there by bus and it is amazing.

They are also great for restaurant feedback and local dishes you should experience and avoid.

What’s the last attraction/museum/landmark you visited?

Glacier National Park in Alaska.  Even cooler than it sounds.  Take a look at these photos.  Also, that picture up top?  I took that there, from my cell phone.  Look how the glacier traveled like lava through that valley (which it carved as it went) all the way back to the mountain top in the middle.  See the waving ice valley as lava.  You can totally see it’s path.  It just took hundreds or thousands of years to get from that mountain top to the sea.

Ever been to a cool off-the-beaten-path landmark you’d like to talk about?

Yeah, Bobo took me to this super weird and awesome secret hamburger spot in Manhattan, NYC.  It was in this huge building lobby.  To the corner of the lobby was a large black curtain.  It appeared to be nothing, and had no signage or anything.  It just look like it hung in the corner, maybe obscuring some ugly wiring or cable.  Behind it, though, was a secret entrance to this amazing and supey divey hamburger joint.  How divey?  Well, the only menu was a cardboard sign written in magic marker above the order window.  BUT… it was a fully functioning and very tasty burger joint.   This is something Anthony Bourdain would know about, but never tell you.

This type of bizarre and awesome nonsense is EXACTLY why I made the point above.  How having a true local guide you around is always the most superior travel adventure.

If someone were to visit the city where you live, what’s the coolest thing to go see?

Red Rocks Amphitheater.  It is everything you have seen and heard and better.  Even cooler?  You can go anytime… for FREE!  When it isn’t a concert venue, it is a state park.  So, on non concert days, you can walk right in and stand on the stage.  Hell, you can bring your acoustic and play guitar on stage.  THEN, you can tell all your friend that you played Red Rocks.

Is there any place you’ve visited that you’d love to go back to?

Just about everywhere we have been internationally.  Haven’t been in any city overseas for more than a week, and obviously you can’t scour a whole country in a week.  Top choices?  Italy (everywhere), Barcelona, Spain, and… well… everywhere.  Heck, give me more time in Seattle and San Fran.  God, those cities are SO cool I would move tomorrow if we could afford anything there.

For Barcelona, it was worth crossing the Earth just to see the Guadi buildings.  He is this amazing and somewhat insane architect who builds the coolest shit on Earth.  He is also the guy behind the Sagrada Familia.

If you could move anywhere in the world and be guaranteed a job, etc, where would you go?

Italy. Not Rome, mind you, but a little seaside village. A close second would Barcelona. Third place? Right here in Colorado.  That pic up there is the ‘Sagrada Familia’.  It is a church being built in Spain.  Look closely at the crazy architecture.  It’s like a combination of a cartoon and a hallucination.  They have been building it for about 100 years, and they expect it may be another 100 years.  Wanna work there?  You can.  It doesn’t pay, but if you show up they will teach you a trade because they (the family carrying on Gaudi’s work) needs all the help they can get.  That is the kind of society I want to live in.  Even though I am super atheist, I will gladly give my days and nights to see such a marvel come to life.

If you had a time machine, and could witness any one event without altering or disturbing it, what would you want to see?

Easy, the Kennedy assassination. Not necessarily to stop it, or even solve it. But, I have a LOT of questions that have never been answered sufficiently by the Warren Report. In fact, I wouldn’t mind a loop – Groundhog day style – of being there 30 minutes before it happens. I wanna do that 5 times. I could just be a ghost and not interfere. I wanna be behind that car, then I wanna be on the grassy knoll, then I wanna be in that room wit Oswald.

Which do you prefer: cats or dogs? Why?

Both I love very much. Obviously, a dog’s love and loyalty are extraordinary. I am still trying to be the person my dog thinks I am. However, there is something to be said for the independence of a cat.

I just envy their life. They serve no master but themselves. They live in the moment, and still seem to have a sense of wonder about life that the rest of us (dogs included) lose over time.

How many animals do you have?

Gosh, a lot. 2 horses, 2 dogs, 2 cats, and some fish.  I wish I could have more.  However, it is already just about impossible to leave town on vacation.

Does this dress make me look fat?

God no, you look great! Wait, what the hell are you talking about?  We were talking about traveling, and love of animals… and then this?  You are a mess!