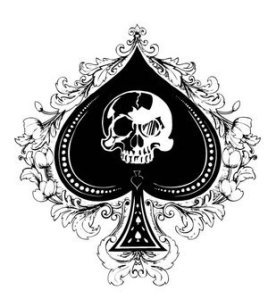 The Ace of Spades will fuck you up. Here’s why.

In history, the Ace of Spades was known as the ‘death card’ in gambling. The story goes back a long time, and became a common message and myth during prohibition, and then later in ww2. It has almost always meant very bad juju.

But there are also some PSYOP success stories. In Vietnam, US planes sprinkled enemy territory with playing cards, but prior to carpet bombing, they dropped only the ace of spades. Before long, the Pavlovian technique took hold, and just the dropping of aces was sufficient to clear an entire area.

It was not unheard of for US soldiers and Marines to stick this card in their helmet band as a sort of anti-peace sign. This isn’t why I am writing, though. Nor is it why you are reading. I want to talk about what the Ace of Spades means to the ‘winners’ Let’s just call it the Ace going forward, for brevity. I want to talk about something weirder; how the Ace was chosen twice by the winners. In 1959, Buddy Holly was on a tour across America with the latest hit makers. Think of a super quick version of Lollapalooza.

These were the biggest artists in America, but they only did a set of 4 or 5 songs. Seems like an awful lot of trouble, driving 10 hours between cities just to play a few songs. That was the business model back then, though. This was LONG before the days of Prevost coaches and RVs. This also shows you how dumb and greedy the promoters were. The whole tour was given a school bus to cross the country. No beds, no tvs, not even seat belts. On top of that, this tour was through the Winter and their bus had no heat. It was so goddamn cold going from town to town that Buddy Holly’s drummer got hospitalized for frostbite.

The terrible night Buddy died, he had had enough. They were facing an 8 hour drive on a school bus to the next gig in a winter storm with no heat, remember. They certainly didn’t have 4×4, or tires chains.  Really, a retired school bus is the most dangerous thing you could take into a snow storm.  And… the most uncomfortable!

As you can imagine, the plane that night was a hot commodity. Drive 8 hours in freezing school bus through a blizzard, or 2 hours in a heated plane. So, the other guys understandably fought for the available other seats. The last seat came down to Waylon Jennings (the Dukes of Hazard voice guy) and Richie (La Bamba) Valens. Both wanted a seat, and neither was going to do that fucking drive again. So, how do we decide who gets the plane? We gotta be fair!  No sense getting in a fight here, we are all still stuck on tour together. So, they agreed to draw cards and high card wins the spot on the plane. Richie pulls the Ace and wins. WINS!!!!

He gets a 2 hour heated plane flight over the storm.  Then a night in a hotel.   While the other sucks schlep across the country in a busted old school bus. We all know how that ends, as tragically the plane crashed killing everyone. To me, that isn’t the crazy or creepy part.  These things happen. It is that they fought for that seat, and it was the winner who got the seat on the plane.  Getting a spot on that plane that night was basically the highlight of the tour.  Richie Valens was the winner.  Geesh, some prize, huh?

In 1986, Metallica was touring Europe on their ‘Master of Puppets’ tour. Unlike the Holley/Valens tour, they had a really nice bus. The day before Cliff Burton (their late bassist) died, he told a reporter that touring was way better now that they had their own bus.  I just recently read this article.  All he could do was gush about touring was finally decent.  No more vans.  The had their own bus >  a toilet, heat, a bed, some tables to hang out and chat and drink and cook.

After a gig in Sweden, the band was off to another gig and an all night drive. The bus only had a couple of bunks. The best bed was in back, and they often fought for it. You see where this is going, right?  Cliff and Kirk (their guitarist) drew cards to see who would get the good bunk.  Again, we are just trying to be fair, folks. Cliff won. How?  High card wins.  Cliff drew the highest card.  Cliff drew the Ace.

That night, the bus hit a patch of ice and rolled. The collision threw Cliff out of the bus through the window, and then the bus rolled over on him and killed him. Yes, Cliff ‘won’ the high card competition.  Cliff was run over and crushed by his own bus.  The bus he was just sleeping in.  Like some kind of horrible fucking Wizard of Oz moment.

In 1980, Motorhead record the ‘Ace of Spades’. It is a horrible 3 minutes of racket and mumbling, like every other one of their songs. See, Motorhead’s music is absolutely fucking horrible. Seriously, here is a link to the song.  It’s just bad.  The worst part is, this is their best song and their biggest hit.

Lemmy, their singer, is a legend, though. Everyone loves Lemmy. I love Lemmy. He is funny, crazy, charming, and unkillable. In the 60’s Lemmy served as Jimi Hendrix’ guitar tech. He was also the guy in charge of procuring acid for himself and Hendrix. That is just one of the stories in Lemmy’s bad ass life. There is a parable that goes “if Lemmy and God were to fight, who would win?”  The correct answer is “trick question, Lemmy is god!”

So, among their horrible collection of ear blood, he wrote ‘Ace of Spades’. Bad idea, Lemmy. Very bad idea. Dear reader, you are thinking ‘but wait, Lemmy is alive’. Is he? Let’s take a look at what that song did to him. Here is a photo of Lemmy before recorded his 1980 ‘hit’. This photo was shot on his way into the studio that morning.

Here is a photo taken directly after he left the studio that day… perhaps five hours after the previous shot was taken.  This face shatters mirrors in what is now known as “Lemmy induced mirror suicide.”

What is my connection? Well, I have an Ace of Spades story myself. Maybe one day I’ll tell you about it. Anyhow, watch out of the Ace of Spades. You have been warned.

“winning” with the Ace of Spades isn’t ‘winning’, unless you are Charlie Sheen.