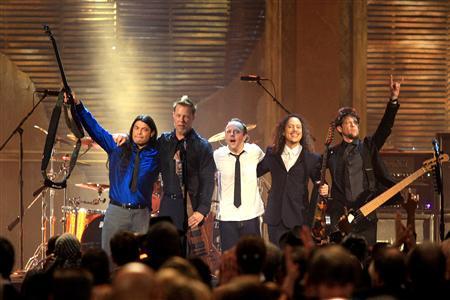 Long ago, I posited that every band would get back together, if they are alive.  Long ago.  I wrote that, specifically, about Pink Floyd.  Since then, the most acrimonious of break ups have re-united.  Pink Floyd got back together, so did Zeppelin.  Van Halen got back with Roth.

So, who is left?  Well, Oasis, but that is easy.  They are attention whores, and will be back together soon.  Tougher?  Stephen Page and Barenaked Ladies.  Will they?  Yes, without question.  Why?  Well, the same reasons all other bands get back together.  Both are not as good without the other.  Both bands are having less exposure, and selling less tickets.  This is common.  Ask Ratt, Motley, Maiden, or Anthrax… who all fired their lead singers… and then had to take them back.

Tougher level of degree > this one is, to me, the holy grail of potential reunions.  not Pink Floyd, or Led Zeppelin.  No.  Guns and Roses.  Will they get back together?  I think they have to.  None of them are doing anything near what they were doing as a band.  I imagine they all became intolerable… we certainly know that Axl did.  However, now they are older (Axl just turned 50) so I assume they have melllowed  a bit.  Plus, there is literally billions of dollars on the table here.  I can’t imagine Axl is rich anymore.  He took 15 years to release ‘Chinese Democracy’, and he refused to do press or tours for it.  So, that is 15 years he wasn’t making any money.  Now, he is gigging again, but not making much.  The new Guns shows aren’t selling out… yet their costs remain fixed (roadies, union stuff, venue rental, transpo, security etc).  These costs are the same if you sell 1 ticket, or 18,000 (average amount of seats in venues they are playing, NBA arenas).

Plus, each smart local promoter has put fines in place if Axl goes on late.  Axl goes on late every show.  Generally, the new Guns and Roses do not go on until after midnight, and then play three hours.  So, let’s say it’s a work night (odds are, it is)… the concert is over until 3 am, you get home at 4 am.  The opening band, see, is over by 9 pm.  So, it’s 9 pm and beer sales have just stopped. You now have a 3 hour wait to see if they will show.

So… is there any band where the principles are alive that will not get back together in some fashion?  No.

Oasis recently broke up when Noel Gallager left the band.  He couldn’t deal with Liam anymore (the lead singer), and no one can.  It is right that when Noel left, the band died.  Why?  Because Oasis is one person… and it is Noel Ghallager.  Noel started the band, and wrote every song.  It’s his band to do with what he chooses.

So, the lead singer (who caused the breakup) has started a new band.  That makes sense.  He is a rock star.  I wonder what he will sing now that he doesn’t have a songwriter.  See, while a great singer, Liam is a no talent ass clown.  He is a sincerely horrible person.  Allow me to expound.

When Oasis had a big break gig in America, they came to play MTV Unplugged.  Awesome exposure, a dream gig.  30 minutes before the show, Liam decides he can’t sing.  Says his throat hurts.  Well, it is too late to cancel the taping.  The audience is set, the band is ready.  So, Noel takes over vocals.  He isn’t their normal singer, but since he wrote every single song… he can wing it.  Noel is a hero here, and rose to the occasion.   So, where was Liam?  Liam was offstage chain smoking, getting drunk, and heckling Noel.  So, Liam could sing… he just chose not to.  Why?  Because he is a monster of a deuche bag piece of shit.

In 1996, (Noel) Gallagher provided lead vocals at a performance for MTV Unplugged[3] Noel was further angered when Liam proceeded to heckle him from the balcony while the band performed. Just before the band were about to board a plane to the United States for their crucial make-or-break US tour, Liam left the airport, claiming he had to find a house for his then wife Patsy Kensit. He later joined the band for their last few gigs and the infamous MTV Awards performance; the remaining dates were scrapped. The band’s future was tabloid daily news. when Liam backed out minutes before the set was due to start. Liam claimed to have been struck down with a “sore throat”; the band later found out that Liam did not like performing acoustically.

Why do I bring this up, to dump on Liam?  Well, because Liam (who never wrote a song for Oasis, or contributed anything besides canceled gigs) is starting a new band.  Guess what he is going to call it?  Oasis.  Seriously, wrap your head around that one.  So, Liam, cheers to you, mate.  You have somehow made Axl Rose and David Lee Roth seem like decent people… and that sickens me!

So, do I want Liam dead?  No, actually I love his voice and I love Oasis.  I just don’t like him.  If he ever gets this band to America, we should assualt him with tomatoes… especially if he dares do any of his brother Noel’s material.  deal?