I have a couple of things I wanted to document.  These are philosophies I want to get down in writing, because I feel they are both valid, and decently unique.  Now, you can’t patent an idea.  Also, to believe I am the only one who has these insights is silly.  But, in all the political crap I watch and read, I don’t see these two ideas represented as well as I think they should be.

I read a lot about politics, and I watch even more.  I am fascinated by it, and it is like a drug.  Hunter Thompson wrote a book called ‘Better than Sex’ about the Clinton presidency campaign.  It is kind of ironic title for our perviest president since Kennedy.  However, Hunter was simply opining that politics is better than sex.

We just got out of a presidential campaign, which means I can put this stuff away for a few years.  So, in order to flesh out these ideas and document them before someone else takes all the credit… here goes.

I first wrote here about the ‘Devil you Know’.  What I am referring to is the aphorism ‘I would take the devil I know over the devil I don’t know any day.”  It is an incredibly accurate psychological expression.  Put simply, for you dummies – people fear the unknown.  I believe, without any question in my mind, that ‘devil you know’ is how GW Bush got re-elected.  He was a terrible president, and everyone knew this.  I mean, a really really bad president.  He was one of the worst in history.  Even the right agrees on this.  How so?  They didn’t let Bush campaign for McCain.  He had so damaged the Republican party that they needed to distance themselves from him.  So why, oh why, would America re-elect him?  The great pollster John Zogby said his prediction day of election was that “Kerry will win in a landslide”.  Now, we can also acknowledge that Kerry was no dream candidate.  He is just creepy.  That isn’t politics talking.

Now, I know the concept of the ‘devil you know’ is far from new.  However, I know it plays a bigger part in politics than anyone realizes.  How else can you explain 87% of American’s disapproving of Congress, yet 82% of Congress getting re-elected every election?  This I have written about before.  See, Americans think that everyone in Congress is a crooked and useless jerk… except their guy.  The devil they know.

I know that GW Bush was re-elected because people fear the creepy devil they don’t know.  This is why most president’s get re-elected (almost 70%).  I think that also played heavily into Obama’s re-election.  It is home field advantage.  In the NFL, for betting purposes, home field teams are given about 3 points just for being the home team.  So, let’s say Denver is playing Cleveland and the game is in Cleveland.  Let’s then say that the gaming line is Cleveland favored by 3 points.   What that means is they are saying if this game were to be played in a neutral location, it would be a tie.  It also means if this game were to be held in Denver, Denver would be favored by 3.  This is why the super bowl is always in a neutral location

Generally speaking, Americans are socially liberal and fiscally conservative.  At least, that is what they will tell you.  To explain that in one sentence – they are fine with gays being married, as long as it doesn’t impact their finances.  I think America is more Democrat than Republican, without question.  So, why don’t them Dems win every election?  Well, one reason is that the GOP is WAY more organized with messaging and voting and everything.  The GOP is disciplined.  The other reason why I feel the Dems don’t win everything is that we split the vote.  This very poorly done graph explains what I am saying here. 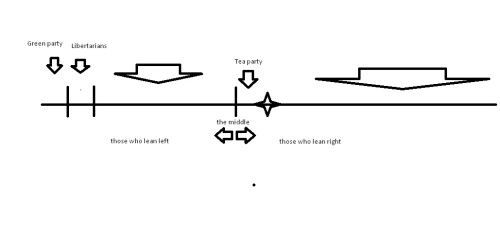 If you take everyone political ideology and laid them out on a straight line, you could put a line in the middle.  People on the right of that line we will call conservatives.  The people to the left of the line are then liberals.  Here is the part where we are talking about ‘splitting the left’.  If you are on the right, no matter if you are a tiny bit to the right, or at the super furthest point to the right… you still vote Republican.  Again, I can prove this with facts.  David Duke was the former Grand Wizard of the KKK.  He ran for office as a Republican, even though the world knew he was king racist. They have 100% of everyone on the right of the center dividing line.  The Dems do not have that luxury.  See, the farther you go on the left, the more the vote splinters.  Green party, libertarian party, Tea Party… etc etc etc.

So, while we can imagine that 50% of Americans are left leaning, the Democratic party will never get 50% of the vote.  Again, this comes down to the discipline the right has.  Also, the right knows about this aspect of the left and they exploit it.  Sounds like paranoia, but it is provable.  The Tea Party was invented by the Republicans to let liberals feel they could strike out against big government spending.  I will name names, in fact.  Dick Armey, a very powerful GOP senator, invented and funded the Tea Party.  If you vote Tea Party because you feel you are sticking it to the man, you are a dumbass and a puppet.  The man invented the Tea Party to make you feel you had a voice.

It is election day 2012.  The polls are closing in a couple of hours, and absolutely no numbers of any kind of have been posted.  No exit polls, early voting… any of it.  I have some thoughts and theories about the election I wanted to post.

All of these thoughts are 100% my own, not recycled from political media

Power outages and general hardships created in New York and New Jersey.  For people who are largely inconvenienced and already disenfranchised, they may not bother to vote.  Many folks in NY and Jersey are literally having to vote in the dark.  We can agree that Dems are not nearly as disciplined as Republicans about voting.  Admit it, we are lazier as a whole.  – edge goes to Romney

Race – I think tons of folks voted for Obama last election because he was black.  It was so they could tell themselves they are not racist.  I’m not racist, they think, I have a black friend at work.  YET… many of these people still don’t trust a black guy anywhere.  Hence, now that they have proven to themselves that they are not racist by voting for Obama the first time, they can revert to their racist mis-trusting selves and vote for the white guy – edge Romney

The “devil” theory.  There is a saying that goes “I’ll take the devil I know over the devil I don’t know any day.”  I truly believe this is almost the entirety of how Bush got re-elected.  I mean, I know John Kerry is creepy… but a rotting orange should have beaten Bush in the re-election.  Advantage goes to Obama

Using the Clintonism “are you better off now than you were four years ago?”  I would argue yes.  Unemployment is down from 11% to 8%.  Gas is cheaper, the Dow is record high, we have ended (or are ending) 2 pointless and unnecessary wars.  We got Bin Laden. Chrysler and GM were saved from themselves due to the president’s intervention. – advantage goes to Obama

Manufacturing jobs.  Both candidates say they want to bring back the middle class and manufacturing jobs to make America great again.  However, it is almost squarely the fault of us Dems*** that manufacturing jobs have left.  Why?  I see 2 pieces to this.  The first is environmental regulations.  We worked to make our environment safer.  This means drastically cutting all forms of pollution.  Well, this runs factories out of the country.  The second piece of this is unions.  The Dems pander to the unions big time, and the unions are fucking us as a country by driving wages up to the point where it’s only reasonable to outsource. Why in the world would ANYONE want to do business here when you have to pay someone $45 an hour to run a drill press and give him lifetime health care on top of that?  Anyone who pays wages like that isn’t a “good American”, he is a fucking idiot.  In this specific aspect (manufacturing)… the Dems are bad for business.

However, it is a compromise.  Do you want rivers on fire, like what happened in downtown Cleveland of Buffalo (Love Canal)?  You can’t have both.  You can have a pristine environment, or you can have manufacturing.  Anyone who says we can have both is lying to you.  Edge – Romney

Religion – do you know that the Mormons believe?  It is ridiculous.  I am an atheist, so I believe most religious texts are total nonsense.  However, Mormonism is up there with Scientology as far as total jive. Edge – Obama

So, who is going to win?  I am not going to say, because that isn’t the point of this piece.

*** I want to make sure to point this out.  If you read here often, you know I strongly dislike the GOP and their ‘sorry you weren’t born rich, but that isn’t our problem’ ethos.  I want to make it loud and clear that the Democrats are the ones who fucked us on manufacturing.  It isn’t coming back, and that is because of the Dems.  Please note why that is, though.  We had to choose, and we chose the environment.  Though I lament the continued destruction of the labor working class, I support making the environment a priority. 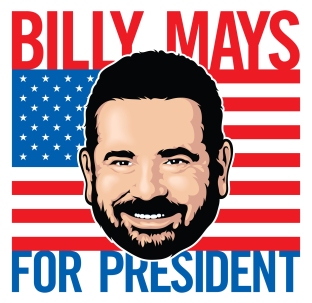 So, the big wall street bailout failed today.  Many will argue why.  Some will say it does absolutely nothing for the taxpaying voter yet spends all it’s resources protecting fat cats.  True.  Some will say there is actually zero protection against existing ‘golden parachute’s for suits who bankrupt their own companies.  That would be correct.  Other’s might say this gives no one oversight witht this money.  All accountibility in the billl gives oversight to the asshats who got us here in the first place.  Yes, also true.

But, it ain’t the message, babe… it’s the messenger.  You bailout folks need a WAY better spokesman.  Know who your rally guy is?  The worst president in history.  That’s what more than 70% of Americans say.  That includes both Richard Nixon and the two terms Mussolini did in the 40’s.

See, you got a guy plugging this thing who has NO credibility with the American people.  He is a liar, a thief, and a war crimininal.  No one will buy anything from him.  I wouldn’t buy cipro from him if he was Donald Rumsfeld and I had bird flu. You need someone with more than pathos… you need both ethos and logos.  Quite frankly,  you need Billy Mays.  If Billy Mays was selling poo on TV I would be a shit millionaire.  Recently I missed an entire week of work because I mighty puttied my junk to the lazy boy at home.  True story, the product does work!

* ok…  to be fair.  One of those statistics is totally made up, and several links are nothing but cereal commercials.
** holy crap.  I am like a prophet.  Up there, I said Bush was at 70% disapproval.  That was, admittedly, a number made up.  Hence the clarification above.  Turns out, I was right.  Fucker’s dis-approval rating was announced today at 67%.  The part about the cereal, though, is also true.