*** ed note:  He didn’t say ‘your mother’ or ‘your sister’… so this is sensitivity progress, fatties.

What is your favorite “go-to” comfort cocktail?

Bourbon and Coke.  Especially prefer that when traveling and only drink that when  flying.  Isn’t that odd?  I don’t much drink that at home.  Home?  Mostly beer.  Plus, I can’t keep coke around the house.  Wifey drinks it all, straight.  Isn’t that gross?  Seriously, I don’t drink Coke straight, to sugary.  If there were no whiskey, and no wifey, a 6 pack of Coke could sit in my fridge for weeks years.

Wanna know a small and uninteresting story about a whiskey coke?  I was traveling in Utah long ago, about 20 years.  Went to a wedding in Provo.  Holy shit that is a beautiful city.  I have written about my secret love for the natural beauty of Utah.  Anyhow, I had heard urban legends of Utah and their drinking rules. It’s all true.  And weirder.  I was at a restaurant and asked for a whiskey Coke.  The nice waitress, clearly Mormon by the dress, didn’t know what that was.  Not that they didn’t have it (they didn’t)… but she didn’t know what that was.  I described it and she was both puzzled and disgusted.

Back then, and maybe today, you couldn’t even just go into a bar.  You went to a bar, and the bouncer explained you could only come in if you were a 1) member, and 2) had a sponsor.  Being a ‘member’ seemed mostly to be what they called a cover charge.  Maybe it was $2.  But a sponsor?  I had to have a current ‘member’ ‘sponsor’ us (the wife and I).  So, he yells back into the bar, “do we have a sponsor?” and some guy yells ‘I got it’.  Then we were let in.  Maybe we looked like narcs?  Then… their beer is only 3.2%, I think it still is.   And they had hard liquor, but with a caveat.  To deal with this much cultiness,   I ordered a double (whiskey coke).  They could not make it.  They could make a single, and sell me a separate shot.  I had to be the one who added the second shot.

In order to get the Olympics, though, they had to loosen most of their laws.  Not sure if that stuck.  Ok… what were we talking about again?

Is there a cocktail that in no way will every be crafted/consumed?

Weird question.  I have no answer.  Wait… how about a cement mixer?  That is a shot that is meant to be disgusting.  It’s a prank you pull on friends… if you are an asshole.  I don’t remember the details, but something like it is poured carefully in the shot glass.  It then only gets mixed in your mouth… and then it goes terribly wrong.   Here, let them explain –

You drink the Bailey’s and hold the shot in your mouth, then take the shot of lime juice and swirl the mixture around. The lime’s acidity causes the Bailey’s to rapidly curdle, so much so that you have to chew down the congealed mass

What would be the worst name for Ben & Jerry’s ice cream flavor?

Earth is visited by curious aliens.  What is the first food that should be introduced to and would represent the Earth?

This one down there?  Look good?  Too much bread.  Like… way too much.   Even been anywhere where they served a 6 foot sub?  Notice how its one tiny millimeter of meat… and five inches wide of bread.  That is how this looks to me.  Anyone who serves you this, me included, is now your enemy.  It is still a good sammich, but not ‘change your life’ sammich. 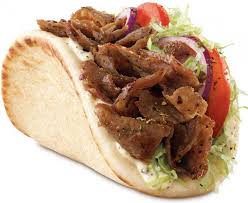 Now look at this below.  Did you say ‘same sandwich’?  Its ok, you are learning.  That sandwich is up there?  It is really good.  It’s not transcendent, though.  Below?  We are getting closer.   I can tell you I don’t know of a single place in all of metro Denver that makes them the way I like them.

that is the correct width of bread.  those onions are wrong, should be red.  The tomatoes should be chopped.  and I swear to your god that better not be ranch.  You want tatziki sauce.  The meat looks perfect, though.  It is charred, and you can tell it came from one of those meat spits.  What the hell is the deal with those things?  Meat certainly doesn’t come that way in nature.  Still, though, that is what you need to see at a Greek place.  The best part about the pic above is a very thin bread. 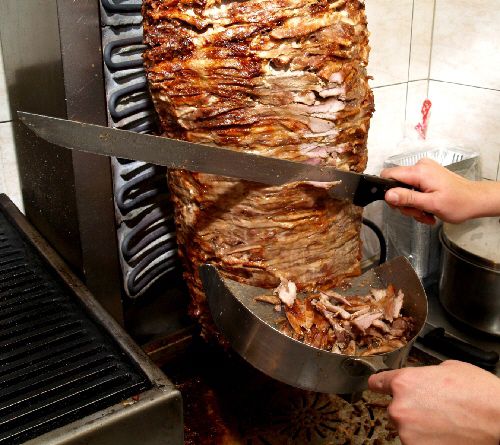 really, how did they get in on there?  Is it a single big ass piece of meat with a spike through it?  I don’t think it is, because a proper gyro is a mix of beer and lamb.   Yeah, we could google it.  But let’s just wonder for a minute.  Remember wondering about the stuff?  Before google.   Tell you what, I ain’t gonna ‘splain it.  Ain’t even gonna look it up myself.   Let’s just wonder together.