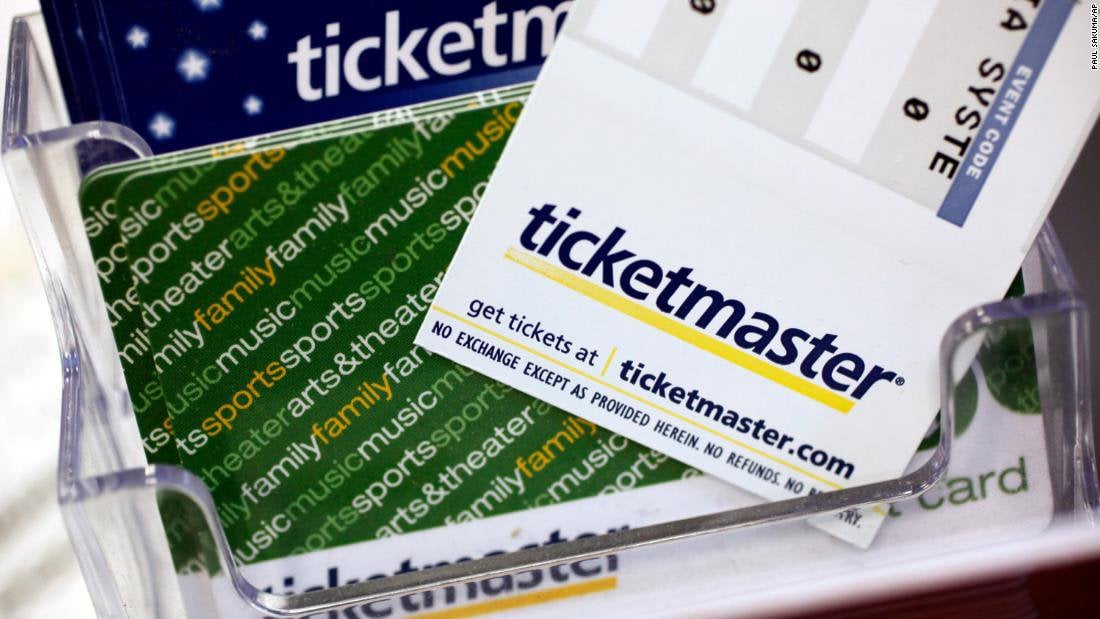 in the last 24 hours, it has come to light that TM is a monopoly.  Pearl Jam tried to tell everyone that back in the 90s.  I mean, it’s been one for 30 years, but it took millions of pissed off ‘Swifties’ to freak the fuck out on TM and on Congress regarding TM.  This is great visibility to a monster problem.  Clearly Pearl Jam didn’t have the mojo the Swifties have.  All our welcome in our tent of hating TM, and being very concerned about their business practices.  Taylor Swift has always been good people, and an advocate for artists.  Not just in vague nice terms, but actually fighting for artists to get a bigger cut of their sales in Spotify, and actionable problems.  Here was a way to fix it.  Don’t put the entire tour of football stadiums on sale at the same moment.  Stagger them.  Problem solved.

I guess we should talk about TicketMaster’s  ‘on demand pricing’.  (ed note:  it’s called Dynamic Pricing, fucko).  I don’t even want to talk about TM anymore.  They have done it.  They won.  They broke me.  I just don’t bother to go to many concerts anymore.  Not when I know I have to do the impossible pre-sale dance to get tickets to a show, or pay 3x the value.

In a twisted way, though, they have taken steps to fix that.  They are now allowing for market demand to dictate pricing.  We’ll use Springsteen as an (unfortunate) example.  TM knows they will sell tickets for $125 each for floor seats.  They know that ALL of those tickets will go to scalpers.  All of them.  They also know that these seats will all end up selling for two or three thousand bucks a piece on the open market.   So, TM figures “fuck the scalpers.  If they are going to sell for $3K, we should get that money!  Springsteen should get that money!”   and you know what?

Prince actually invented this.  About 20 years ago (giver or take a decade or so) he did a ‘club’ tour.  He knew that $75 would get snapped up and sold on the black market for four times that much.  He also can’t make a living playing a venue for $75.  So, he charged $250 a ticket.  People were outraged, but I think its brilliant.  Here is why – the tickets are going to go for several hundred bucks.  Should Prince get that money, or the scalpers?  By doing this, he blocks out the scalpers… AND makes a better payday.  Note, that was $250.  Springsteen tickets have been doing for $5K, face value.

I love the idea of squeezing out the scalpers.  But due to the ‘dynamic pricing’ model, floor seats are $5k.  It kills me they tested this on Springsteen, who is notoriously pro-blue collar working folks getting his tickets.  No, its not just an imagine, he really does.  His camp is notorious for never selling the front row to his shows.  Instead, those are given out to people with the worst seats in the house… free… right before the show.

At $5k, that person never has a chance to go see the boss.  IF the tickets go for $5K, I do believe that should all go to the artist.  But boy, that seems a bit high.

Mind you, TM is no Robin Hood here, either.  As you now know, their ‘convenience fees’ run 30 to 50% of face value of ticket price.  I know ‘convenience fees’ for Springsteen tickets were running close to $1,000.  Now, how is that little piece of cardstock any tougher to print than a play that costs $14 to get into?   Even better, they don’t even print tickets anymore.  Tickets are virtual, a QA code in your phone.

There is a way to squeeze out the black market.  Make the seats will call.  Instead of showing a QR code… the ticket taker person scans your drivers license.  I know this technology works because I have had to use it before.  That way, the person who put the credit card down is the person who has to show up.  what about transferring tickets?  Isn’t that your right?  What if you bought them and can’t go.  What if you want your tickets to go to a little blind deaf orphan?  How would will call work, then?  I would charge a $30 transfer fee.

The newest hot mess on my radar is merch.  I recently learned venues are taking between 20 to 30% of a band’s merch.  Now, the band still makes those shirts, and hires and pay those people to go town to town to sell them.  And the venue then takes a quarter of that.  This isn’t the place for that discussion, though.  But it adds to my general malaise about the rock concert industry.

Since we are talking about tickets, lets talk about the actual physical thing… the cardstock printed concert ticket.  You know this, its gone.  It’s been gone for a year, and I miss them.  Concert tickets were the perfect souvenir.  It’s small, so it takes up no space.  It remains a perfect memory.  We have seen them disappear for a while.  It was a period where it was an email, and now its fully digital.  I was seeing Bobby Weir again last weekend.  As is always the case, I have to assume I may never see him again.  Him being 75 leaves me with fear that he will retire or die before I get to see him again.  It’s been like that for at least a decade, though.  Once he started growing the beard, he aged FAST.  Bobby was literally a child when he joined the Grateful Dead… 16.  Point being, if this is the last time we see him, I’d like that souvenir ticket.  I could do a frame of just Dead related bands I’ve seen since Jerry passed:  Dead and Co, The Dead, Grateful Dead, the Other Ones, Phil and Friends, Ratdog, Wolf Bros, Bob & Rob.  I leave you with this, my collection of ticket stubs.  A year or two I pulled them out and counted them, it was close to 250.  About 98% of that is national touring rock concerts.  And this is only since I moved to Denver in 1997.  I’d like to do something cool with them.  People say ‘you should frame them’.  It’s not the size of a picture, it would cover a wall.

Closer to the front, you see the older classic ticket stub. It gets unruly towards the back as the times change to emails, credit card receipts, wristbands, etc. Here is a quick list of some of the stand out moments.