1.  If you had to drop everything and condense life into whatever you can cram into a car in a 20 minute getaway what would you absolutely pack?

2.  Screw expensive and fancy – what do you like that is cheap, simple and probably a bit embarrassing if anyone really found out?

I love Canadian whiskey.  The cheap shit, in a big brown plastic bottle (like Canadian Club).  I love it because it is sweet, and so makes a great soda mixer.  In addition, it is cheap.  You can get a 1.75 mil (known also as a ‘handle’ to fancy people drink their booze from glass) for less than $20!

3.  Cheap date during the recession – where would you go?

My favorite place – home!  We have a beautiful deck and yard (finally), a kegerator, a great stereo, and netflix plus Roku.  We can do a relaxing night, a movie night, or a get drunk and ugly night.  The house is always ready, since we don’t have kids.  For movies, we have the big screen HD tv with surround sound.

4.  In college, the happy hour with best free food was always a priority.  Any tips on local free food finds.

Oh man, I am out of the game, but we lived by that.  I was working in college and not making crap.  I worked for Greenpeace, so I am not exaggerating.  There were two places we haunted back in Flagstaff.  One place did a deal where if you bought a huge 32 ox mug of beer, you got prime rib sammiches.  Also, there was a wing place (Granny’s Closet?  Something like that) that did 10 cent wings and dollar beers on Thursdays.  Also, a local hotel briefly did a taco bar with purchase of a beer.   They quickly ended that when we swooped in with $2 a piece and feasted.

So, there is a big rumor that Lindsay Lohan is going to play Stevie Nicks in an upcoming biopic.  It’s a pretty solid rumor.   Know why?  It came from Lindsay Lohan.  Doesn’t seem like a bad fit.  They are both over-rated and under talented.  They both love blow.  They are both narcissists.  Fine, whatever.

Well, Stevie Nicks got wind of this and had a shit fit.  Yeah, dig this quote:

over my dead body

Why, Stevie?  What do you care?  This movie will make you cool again.  You can buy all new scarves and shit.  You might be able to do a single interview without having to talk about Lindsay (the real talent).  Wouldn’t this be good for Stevie?  Well, not in Stevie’s eyes.   Why?  Well, it appears Stevie feels Lindsay isn’t up to snuff.  Specifically >

She needs to stop doing drugs and get a grip

See, Stevie is concerned that Lindsay would be an unfair representative of her, since Lindsay has been known to dig the coke.  Stevie says Lindsay is an unfit choice because her love of drugs.  Just want to make sure we are all on the same page here.   See, Stevie used to do drugs, too.  I mean… a LOT.  More than Elton John and Slash combined.  How much coke did Stevie do?  Well, lore has it that after Stevie’s septum collapsed from too much blow, she had an assistant whose job it was to blow cocaine up her asshole.

Read that again, because I ain’t typing it again.  How do you even do that? Scratch that, I don’t want to know.  What I do want to know is how in the world Stevie loves blow?  Her own words.  She speaks of her past wistfully:

Nicks has admitted, she took so much cocaine that “you could put a big gold ring through my septum”

* ‘pulling a Slash’ – last year, for likely very good reason, Slash fired Scott Weiland for having a drug problem.  That is like Hitler accusing you of being an anti-semite.  That is like Liberace telling you not to ‘get all gay about it’.  That’s like David Caruso telling you to keep your sunglasses on. 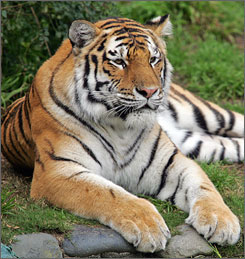 So, this story kinda freaked me out because I am fascinated with tigers.  I love them, and think they are the coolest animal.  So, you know the tale by now…  Tiger breaks out and attacks zoo patrons.  Tiger kills a 17 year old kid.  Normally, when you hear about this stuff it is a zoo handler who was careless with safety policy.  I have never heard of a zoo animal breaking out and attacking someone.  What was most interesting is how the tiger got out.  See, a gate wasn’t left open.  That tiger got out of it’s regular cage somehow, and for some reason.   This picture above is not just a tiger… it is the tiger.  That is the late Tatiana, who was put down for safety reasons.

Ooooh, guess what.  We just found out the how and the why.  Why did the tiger cross the road?

police considered whether one of the victims taunted the deadly jungle cat.

yeah.  Dude taunted the tiger.  How do we know?  evidence, baby, evidence.

A shoe and blood were found between the fence and the moat, the Chronicle reported, and a footprint has been found on a metal fence at the zoo.

Yeah, jacked up isn’t it?  Now we even may know how the tiger got out.  The tiger climbed up the kid, who may have been IN the enclosure.

The investigation is looking into the possibility that the tiger escaped by latching on to a leg or other body part, the paper reported.

“Somebody created a situation that really agitated [the tiger] and and gave her some method to break her out,” zoo director Manuel Mollinedo told the Chronicle. “A couple of feet dangling over the edge could possibly have done it.”

Now the father is all upset at the zoo, and understandably so.  However, I think the tiger did what the tiger does.  I guess, to me at least, it is implied not to jump in the tiger cage and taunt them.  They probably even have signs to that effect.  I know none of us practiced good judgment when we were 17.  I can tell you I never jumped in a tiger’s cage.  Of course, because of numnuts, the tiger had to be put down.  That makes me sad, because tiger’s are endangered.  Know what isn’t endagered…. 17 year olds.

This story reminds me of a Chris Rock bit about Sigfried and Roy.  He was talking about how people said the tiger went crazy when it attacked Roy Horn.  Rock explained the tiger didn’t go crazy, the tiger went tiger on his ass.  These are large and deadly jungle cats who will kill you.   Don’t train them, don’t taunt them, don’t hug them.

* post script – one day later.  it is entirely possible this kid saved his buddies life, and was NOT taunting the tiger.  There are conflicting stories.  Still, that bit about tigers being endangered and 17 kids not… that was some good stuff wasn’t it?  I mean, we are still friends, right?  Just because I implied the kid deserved to be eaten by a tiger.  With the information i had at the time, I stand by my statement.  That being said, I was very possibly wrong.  There.  I said it.