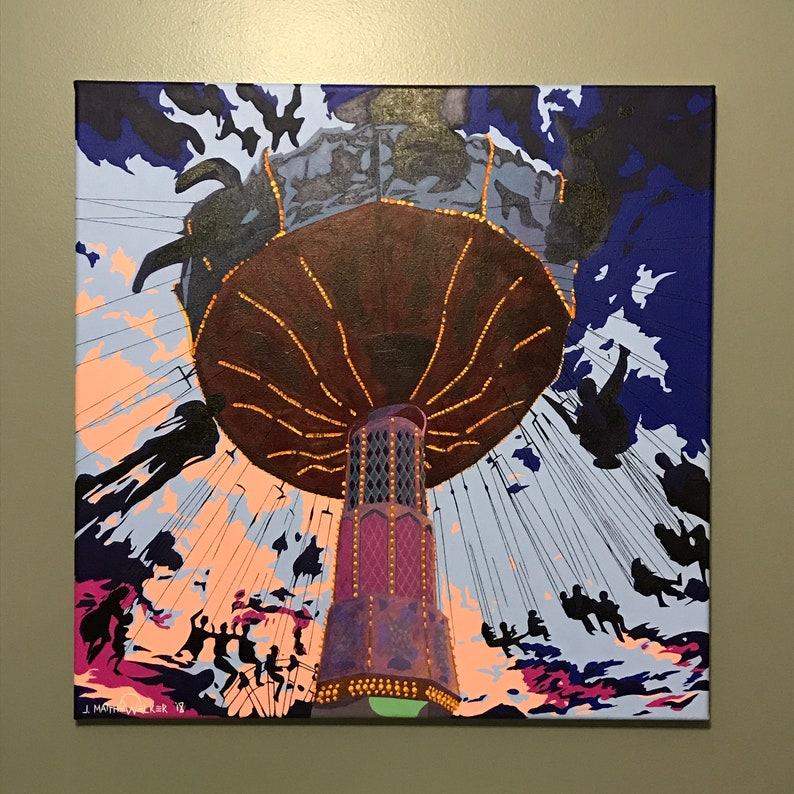 When was the last time you went to a state or county fair?

Ah, the county fair.  What a perfect bastion of Americana.  My association is different than most.  You probably expect me to wax poetically about can’t win games, the fatty food, the fatty people… etc.  No sir.  I am not your Normal Rockwell.  *** ooh, good song title!!!

For me, the fair was about concerts.  For me, especially when I was younger… everything was about concerts.  The state fair for Arizona was held at and around Veteran’s Memorial Coliseum.  This where the Suns (our NBA team) played.  More interesting is notice how it isn’t name after a corporation.  Ooh.. I just googled it and it is still around.  Kinda scary, as it was 30 years old when I went there in the 80s.  AND… it is apparently still where they hold the state fair.  Just about every night during the fair, they would have a national band playing the arena.  The fair cost (this is in the 80’s) $5 to get in.  With that admission, you got free admission to whatever concert was that night.  Seating was open, and simply first come first served.  I wasn’t much into the carnival thing… because it’s a one hundred and twenty fucking degrees all day.  So, hanging out on tarmac/asphalt under the sun was not my jam.

I got to see CSN there, the Fixx, Allman Brother’s… and likely a ton more that I just don’t remember.  Did some more googling, and they have a terrific site!  Look at this, they have all the concerts listed there.  My whole childhood laid out.  $5 to see a national act, it was amazing!  I would often go alone.   $5 was even then an insanely good value to see a national headlining act.  The last concert I went to (right at the verge of Corona Virus lockdown) was Dwight Yoakum.  After fees, tickets were about $80 after fees. This was actually one of the cheaper national shows I have been do.  I did a cool google search to see $5 then (mid 80s) equals now.  The answer is $12.20 today.

Did you try your hand at the midway games?

Of course I did.  And I sucked at them, just like everyone does.  Steve Martin explained the whole racket in ‘the Jerk’.  Well… had it explained to him.  Sames!  I know at one time I did win a 6 foot inflatable Gumby doll.  What I did with that gumby tall was put him in the shotgun seat (belted in, of course) with a baseball cap over his pointy head.  Then, use him to drive in the carpool lane.  My windows were tinted, so all I needed was a silhouette.  It totally worked!

So, I googled this to make sure I was remembering correctly.  Sure enough, I DID have a 6 foot tall inflatable Gumby.  Even weirder is that you can have one, too!

Which of the rides were your favorite, either now or as a kid?

I can tell you which ones weren’t – roller coasters.  Not sure if I have told this story before, but maybe should be saved my therapist.  I didn’t like or use roller coasters.  Not because I was scared, it would get sick.  It was because I was a physically tiny specimen.  When I was… oh… 10 or 12 or whatever… I was pretty short.  I wasn’t just short, I was skinny.  I had very little body mass of any kind.  Even if I was tall enough to ride the roller coaster, the safety bar was useless.  See, that safety bar was designed to fit every size adult.  You know, it swings down and works as a lap belt, of sorts.   Well, it only swings down so far.  Mind you, this certainly wasn’t a full shoulder harness that they use now… just a lap bar.  Back then, however, seat belts were only lap belts, as well. 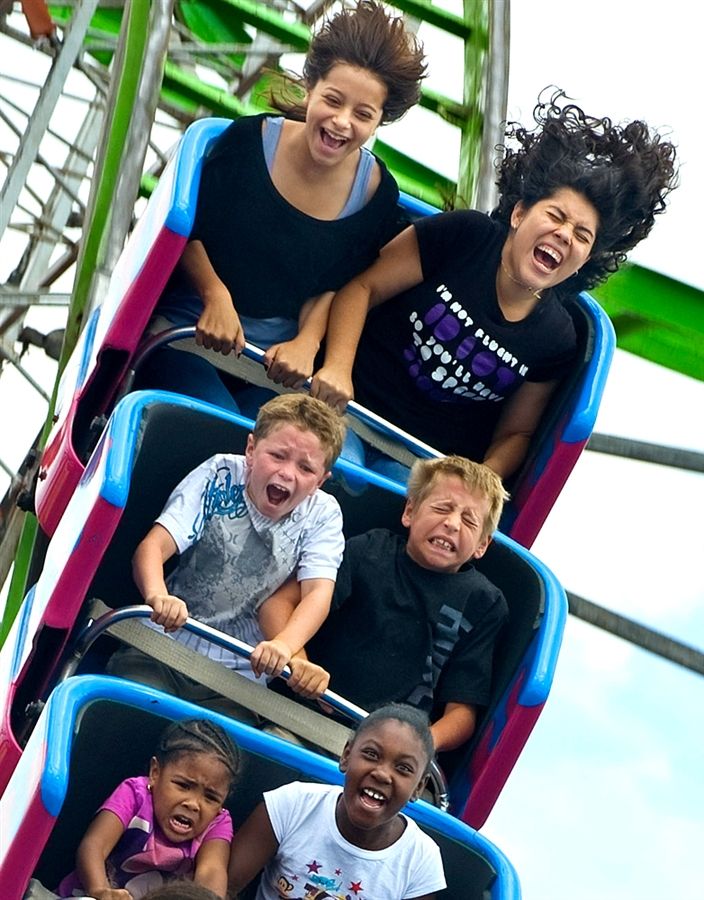 Once the ‘safety’ bar was dropped over my lap, there was still a good 4 to 6 inches of play.  Meaning, there was no physical contact between my body and that bar.  Not even close.  I suppose the roller coasters were designed to hold you in place by centrifugal force, anyway.  Perhaps the bar is just a formality.  I didn’t know that.  I got into one of those things and realized if I didn’t hold onto that bar, I would be ejected.   Since those things went upside down, I avoided that shit altogether.  Now, being American and middle aged… I am overweight.  This means I nestle nicely in these coasters.

A picture is worth a thousand words.  See the kids in the middle?  Do you see their terror?  It’s isn’t thrill, it is simply waiting for death.  Look at the safety lap bar they are holding on to for dear life.  See how it is wedged safely in their torso to hold them in place?  EXACTLY my point.  That bar is cranked all the way down.  If this thing like stalls while upside down?  Those kids are toast.  This is how I remember them.  Perhaps you think ‘well, they had redundant safety measure in place, and they are all designed to hold you in place my gravity or centrifugal force’.

Do you see that sign?  Ok, the guy who couldn’t spell ‘exit’ is the guy in charge of this ride.  If his knowledge of physics and mechanics is nearly half his understanding of the English language… I ain’t getting on that ride.  Note, I didn’t google search to find a stock picture that would make carnies look dumb.  This was a very real sign at the Arapahoe county fair.  I took that photo myself.  Yeah… the who put this sign together is the one in charge of building the roller coaster.  Doesn’t strike me a ‘reads the directions’ type of guy.

Yes, 10 year olds do talk like South Park characters.  At least, I did.

Did you ever enter anything into the exhibits? How did you do?

Wait.  Back up for a second.  I should apologize, I never answered the first question.  When was the last time I went to a County Fair?  It was a couple years ago, the Arapahoe County Fair.  I should note that Colorado does have a state fair, but no one has ever been.  Why”  Because it is in Pueblo, CO.  It is almost 3 hours away.  PLUS… it’s a miserable shithole of a city.  What Arizona did made sense.  The state fair was in Phoenix.  Not just because it’s the capital, but because it is the population center of the state.  Anyhow, the Arapahoe County Fair is dope.  It is just like any other county fair, except for one thing – demolition derby!!!!!

Actually, maybe demolition derby’s are common to fair’s,  but I only saw one once ever.  There is nothing better > not sex > not jamming with Jerry Garcia > not even tripping balls peaking on LSD at Magic Mountain in Disneyland**** is better than a demolition derby.  The best was a van in the competition.  A van!  Van’s don’t crash or skid… the roll!  And roll and roll this van did.   Then… it caught fire.   FUCK YEAH!

*** I have done two of these three things.

What is your best memory that you take from a fair?

Um… see above.  That is all we have been covering.  Did you even pay attention?  You want a single best memory?  Hmmm… besides watching a van roll over and catch on fire.. it may be CSN.  I have seen Crosby, Still, and Nash a number of times.  Maybe… 6?  Odds are, this was my first time.  To see ‘Suite” Judy Blue Eyes’ performed in person is a pretty perfect moment.  I can’t think of a better song.  That song is up there with ‘Born to Run’, ‘the Weight’… etc

Actually, I can think of a best moment.  At the demolition derby, we were with a buddy and his family.  A lot of the day was me hanging out with Alyssa.  She is his daughter, and a super cool kid.  We had the same taste in rides, so we hung out a lot that day.  Best memory just may be sitting with Alyssa in the stands sharing a funnel cake and watching the demolition derby together and just losing our minds that this was a real thing we could do.  I had never seen one in person.  It is spectacular!

It still makes no sense.   So… people crash cars?  On purpose?  Into each other?  Over and over again?  As hard as they can?  Until something catches fire?  They are allowed to do this?  No one stops them?  And we can just watch this for fun?  God bless America!

Again… let’s take a look at that ‘exit’ picture.  Note that it was put up quite well.  Aside from the spelling… look how perfectly level it is.  Note how perfectly equidistant each letter is.  This sign was not just thrown up in haste.  I think that is what scares me the most.