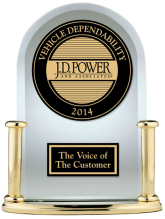 One day, long ago, JD Powers started loudly announcing companies who had won their prestigious and rather made up*** ‘JD Powers Award’.  ( Wikipedia note:  company started in 1968, but it was 1984 when they came to public attention with their ‘awards‘).

It meant best in class service.  Now, 35 years later, this name carries some weight.  That isn’t because it means anything, it is just through persistence and advertising that they have made their name something.  In those regards, Kudos to them.

Why do they bother?  Well, to most consumers (myself included), there is really only one company’s opinion that meant anything – Consumer Reports.  Know why consumer reports endorsement means so much?  They are a non profit!  They take no grift, which is incredible.  When they test a car, for example, they don’t get one issued to them from the manufacturer.  They actually go out and buy that car.  That way, they aren’t getting a special souped up car that the manufacturer handpicked.  Go ahead and pick one up, notice something you have never seen before:  no ads.  Not a single advertisement!

So, why not just go with Consumer Report’s reviews?  This is where it gets even better; Consumer Reports won’t let company’s use their name.  It is how they stay pure.  This is why you will hear car makers say ‘a leading consumer publication named (insert product here) truck of the year’.

So that is the great and wonderful Consumer Reports.  What does that have to do with JD Powers?  JD Powers uses a similar system of gathering consumer info, complaints, praises… etc.  This is good, and we like this.  Here is where my beef comes in –

This last one is a BIGGIE, and I have direct experience with it.  Let’s say your company wins the ‘prestigious’ JD Power award for best butt cleanser.  Let’s say that butt cleanser is your company’s butt cleanser.  This is great news!  I can’t wait to tell the world!  I can’t wait to put this on our door, and in our press briefing.  I want that logo on my website!  Hold up there, little buddy.  That will cost you $50,000.  True story.  I worked for a company that won a JD Powers ‘Best in Class’ award.  We were REALLY proud of that.   Honestly, we were genuinely stoked and proud.  This was a small team that worked their ass off to be the best.  In fact, the line of business that won the award was something I had a large hand in building from scratch.  This was something my team and I were so proud of, but we couldn’t tell ANYONE.  Not without paying $50,000 to JD Powers.

Because I am fearless, and work hard to tell you these tales, I did some research.  I camped out in front of the JD Powers building during their last nominating committee.  I took some pictures, but it’s kinda illegal to just post people up in here without their permission… I have an artists rendering –

While that isn’t exactly extortion, it sure looks like a shakedown.  I would bet when JD Powers started out, they gave away rights to their little prize… like a drug dealer always gives you the first taste free.  Even if you do ‘win’, they are all up in your business –

J.D. Power now fiercely protects the advertising of its ratings, and companies must pay a licensing fee to do so. Additionally, ads must be pre-approved by J.D. Power, and the categories that can be used in advertising pitches are pre-determined each year before the surveys take place.

This reminds me of a very similar scam, ‘Who’s who in Business’.  When I was a kid, I remember my dad was featured in a ‘Whose who…’ feature.  He was a big important banking something or other.  I was so proud of my pop.  Maybe back then (30 or 40 years ago) this was a legitimate thing you had to earn.  Now it isn’t.  I know this because since then I have received many many solicitations to be featured.  They don’t ask your accomplishments, and there is no governing body to decide who is worthy.  Like being a member of the Universal Life Church (of which I am), turns out all you need is a name and ideally a face.  At least it’s free to join the ULC.  I have been a good Reverend under their banner for 19 years now.  Their vetting is akin to JD Powers and Who’s Who.  You have to have a name, be able to type in that name… AND… hit ‘submit’.  Kinda like how I get this web page URL.  Turns out, you don’t have to be correct at all.  I just… am.

You pay these people, and then they feature you in a short write up in their publication.  Then, you can use it on your resume.  I have seen people put this on their resume.  Don’t.  It doesn’t tell me you are a well regarded business person, it tells me you had $100 to spend.

When I see a JD Powers banner on a site, I don’t think ‘wow,  now this is a great company!’  I think, wow, maybe they could have spent that $50,000 on something more meaningful… like hookers and blow.

*** rather made up – ok, I admit that is some judgmental semantics.  Everything was made up originally.  I just feel every move by this company is calculated empty bullshit.  PLUS… I have never once claimed to be objective.  That isn’t why you are here.  Judging by the really terrific response and hits this piece gets… y’all agree with me.  We are Correct!